History of the Umbrella

As the heat and rain are just facts of life, it’s hard to imagine humans having never been without umbrellas since our ancestors learned to fashion tools. However, the umbrella as we know it today indeed has a history that tells us how uncommon its use was for centuries and of its exclusive associations.

The English word “umbrella” comes from the Italian word “ombrella”, which traces its origins from the Latin word “umbella”, which is then derived from “umbra”. These Latin terms translate to shade or shadow. Like the word “parasol”, which is a combination of the French words “parare” and “sol” to mean “shield from the sun”, the umbrella was originally used to give oneself shade from the heat of the sun.

This etymology is reflected in how ancient civilisations used umbrellas. 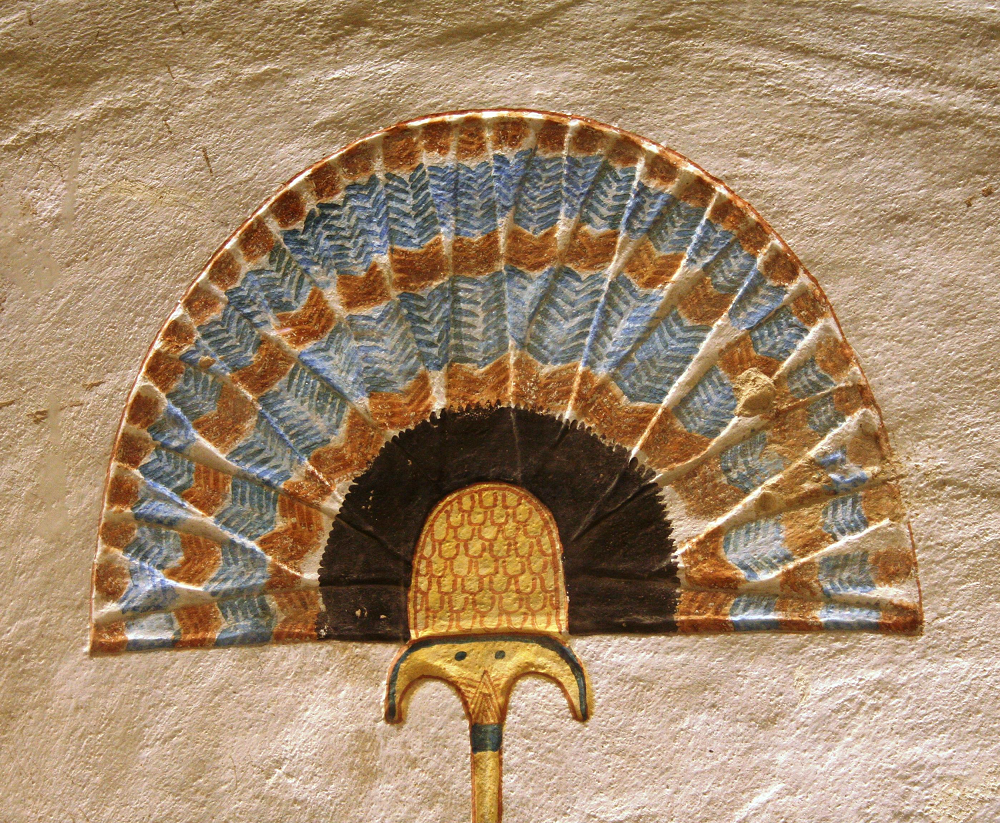 Egyptian sunshade from the Tomb of Khaemwaset (Source: Art of Counting)

Ancient Egyptians made umbrellas out of palm fronds, feathers, and stretched papyrus. They were attached to chariots or held by servants over the heads of royalty and divine figures as they made their processions underneath the hot African sun. 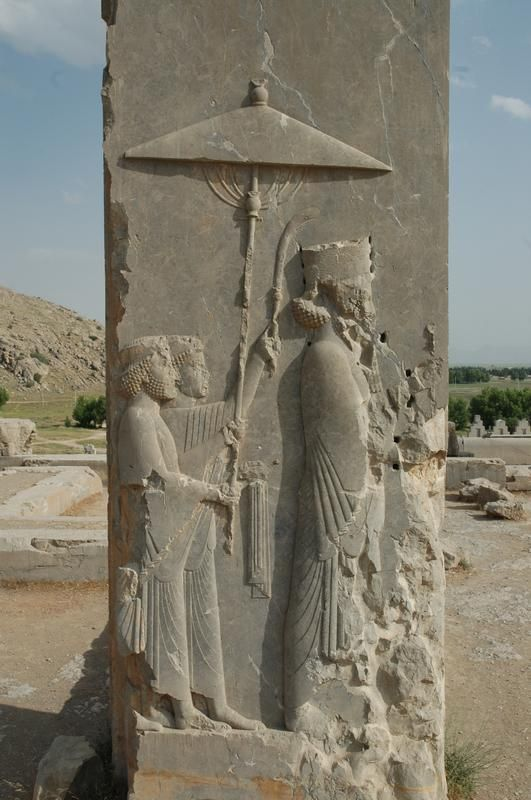 In Mesopotamia, a similar picture is painted by artefacts from around the same period. Babylonian kings were attended to on their chariots with parasols. These parasols were distinct in the curtains that hung behind them. Only such rulers had the privilege of getting shade. The same could be said of Persian monarchs based on sculptures that survived that time. 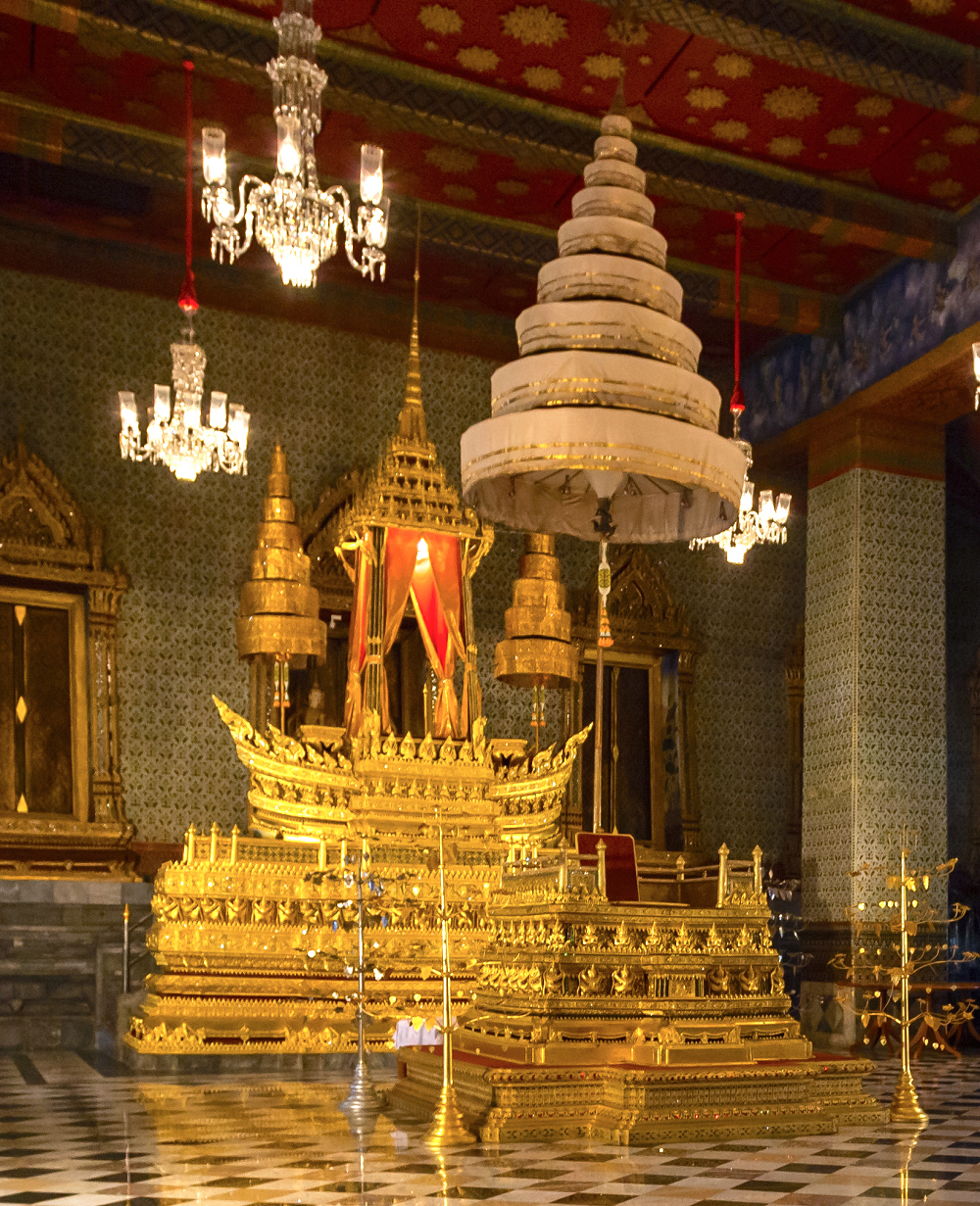 Hindu culture assigns great importance to the umbrella with the chatra, a symbol in Hinduism closely connected to divinity and fortune. Ancient Indian and Burmese kings and princes had large, elaborate umbrellas in their throne rooms. 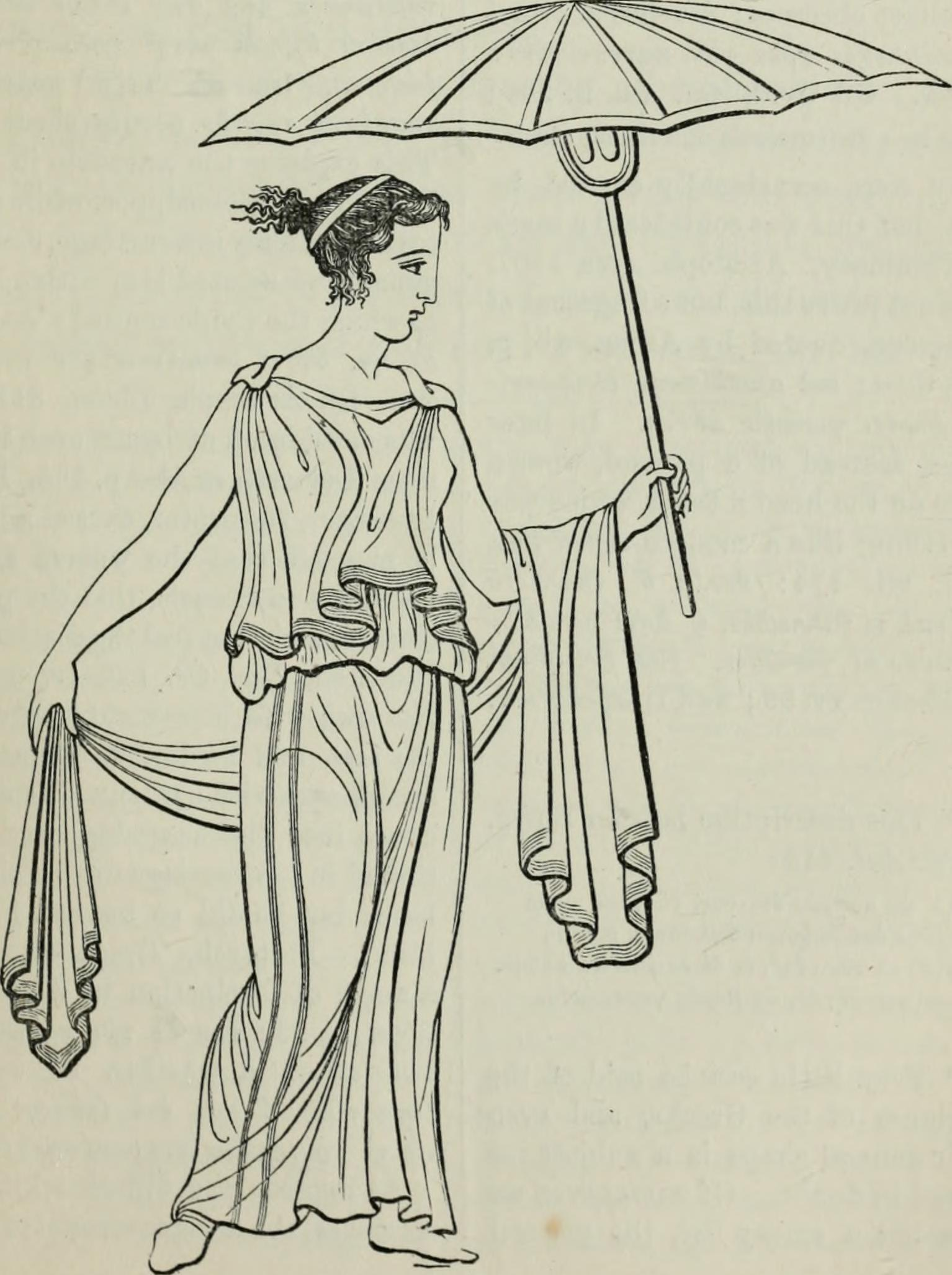 Illustration of an Ancient Greek woman with an umbrella (Source: Wikimedia Commons)

Noblewomen of Ancient Greece were known to have their female slaves carry parasols for them not just as protection from the sun but also as fashion accessories. Such was the connection of parasols to women that Greek men’s masculinity was questioned if they were seen carrying a parasol.

The Romans followed this tradition, with women of high status covered underneath parasols held by their maid-servants, while men who used parasols were considered effeminate. There are historical accounts of 1st century Roman women applying oil to their paper parasols to make them useful against the rain. 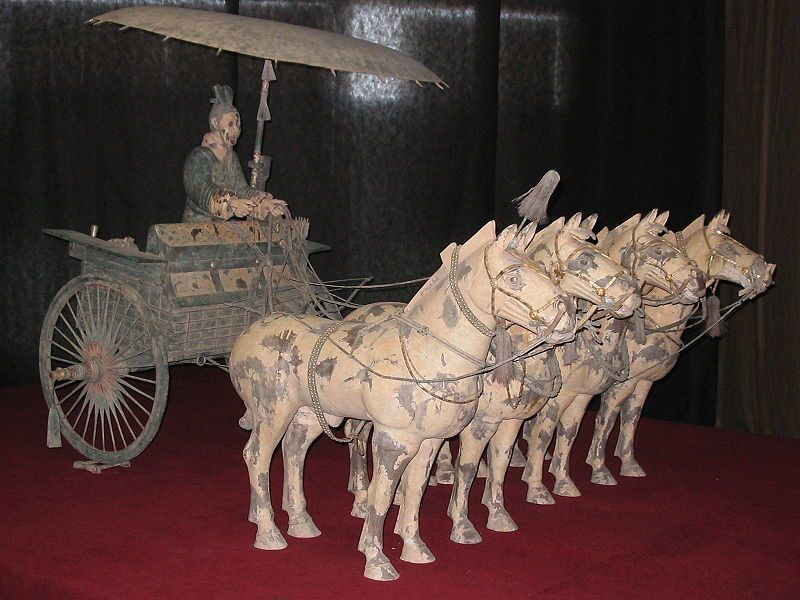 China made use of umbrellas and parasols as protection from both the sun and rain, but this practice was also confined to the upper classes. Imperial carriages were outfitted with numerous umbrellas, serving practical and ceremonial purposes.

The ancient Chinese are also credited for having the earliest recorded use of collapsible umbrellas, with texts from as far back as 2,400 years referencing umbrellas that could slide and close.

The Dark Ages of Umbrellas

Records of umbrellas in Europe’s Middle Ages are extremely rare, giving the impression among historians that this tool was rarely, if ever, used in the region. Cloaks were the oft-cited instrument that medieval European people used to cover themselves when caught out in the rain.

It was only in the 16th century that mentions of umbrellas popped up once more in European history. However, such accounts are restricted to the clergy of the Catholic Church in Italy.

Umbrellas in The 17th to 19th Century Europe 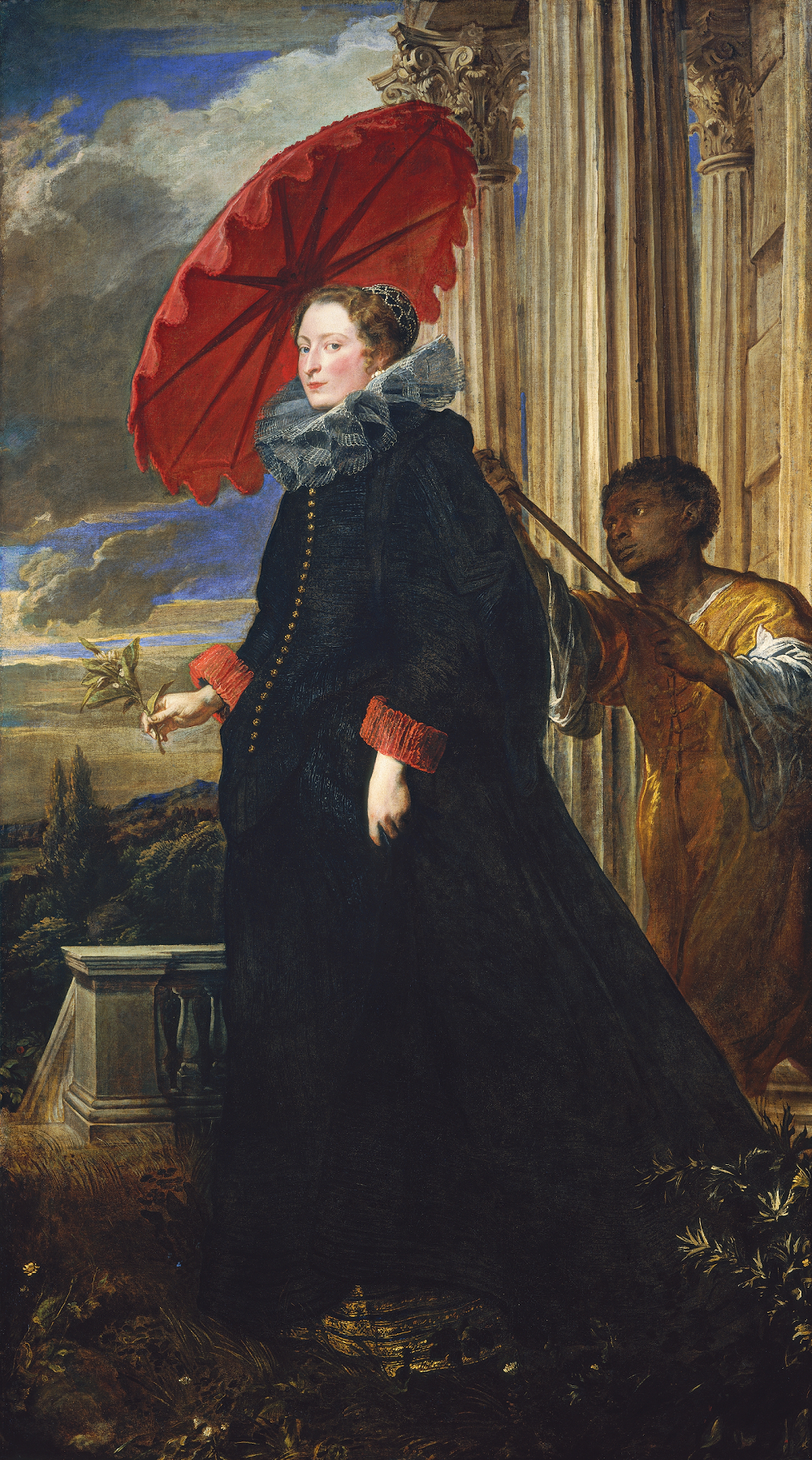 The 17th century did see a rise in the use of parasols and umbrellas in England and France. Presumably, this is because of the growing relationship between Europe and Asia during this point in history. China and India never stopped using these tools, and both countries’ cultures began to seep into the West.

Parasols and umbrellas continued to be handled directly by servants as they attended to their masters, although there are accounts of Italian horsemen employing them as they rode in the sunlight.

Umbrellas, during this period, were cumbersome. Common materials that were used to make umbrellas were wooden rods or whalebone with wax-coated canvas canopies. 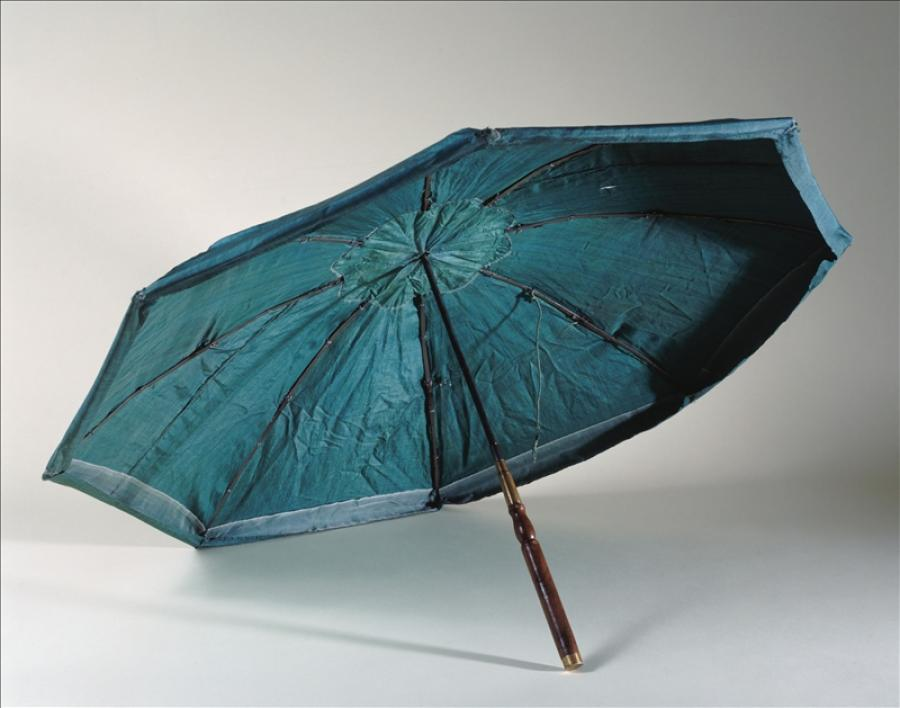 Parisian merchant Jean Marius popularised the lightweight folding umbrella in Europe in 1710. Its mechanism for opening and closing is similar to that of today’s umbrellas. Umbrellas specifically used for rainy days became more common in France throughout the 18th century, with rental services first appearing then giving way to more and more shops that made and sold umbrellas for everyone. 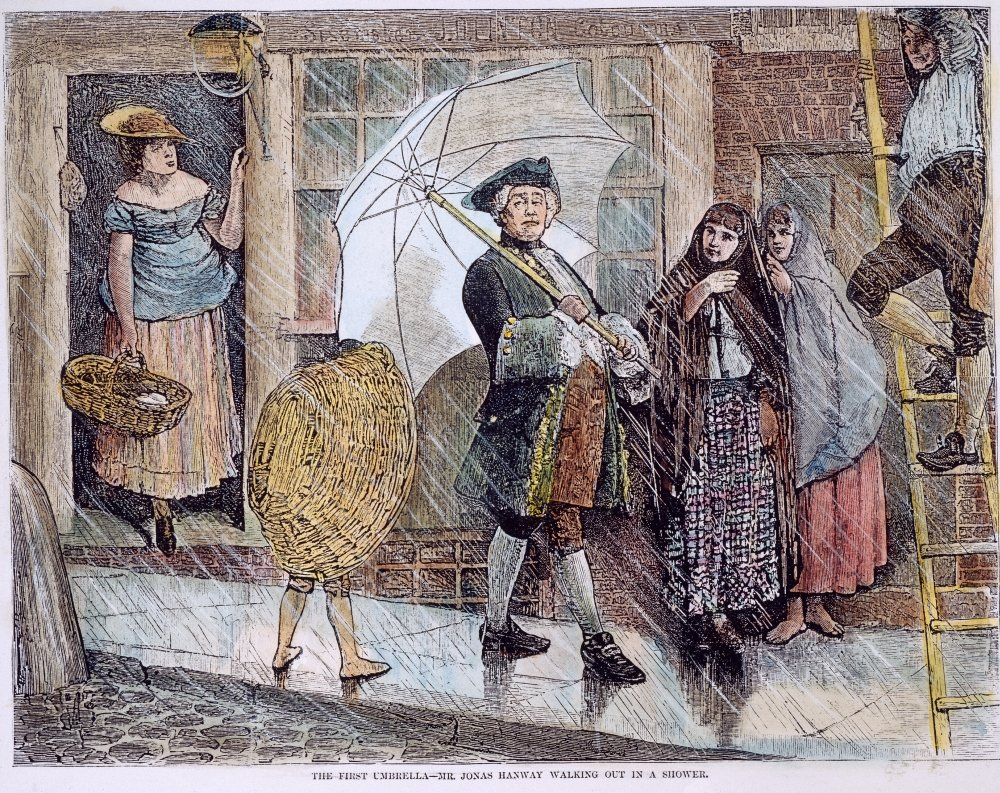 England did not shake off its antiquated view of umbrellas only being for women until Jonas Hanway started carrying one in public around 1750. The gentleman writer would always have an umbrella on his person as he went about the streets of London, enduring ridicule from men who thought anyone with money could just take a stagecoach if it rained.

Hanway’s insistence on bringing an umbrella everywhere he went eventually helped make its use among Englishmen publicly accepted by the late 18th century. His reputation was such that an umbrella carried by a man was called a “Hanway”.

Samuel Fox invented the steel-ribbed umbrella in 1852, further reducing the weight of the umbrella while strengthening the frame. This greater utility contributed to its increasing popularity. Gentlemen of great means also began commissioning custom umbrellas with handles that could store anything from flasks to daggers. Umbrellas had become a crucial item in the gentleman’s ensemble by the turn of the century.

Hans Haupt and his patent for the telescopic pocket umbrella (Source: Heddels)

The first big innovation for umbrellas in the modern age is attributed to Hans Haupt with his invention of the telescopic pocket umbrella in 1928. Haupt came up with the idea of an umbrella he could collapse and fit in his pocket, as he suffered an injury from the war that made it hard for him to carry both a walking stick and an umbrella.

Haupt likened his pocket umbrella to a toddler for its small size, calling it “knirps”, which is German for “tot” or a young child. Knirps would become the German brand synonymous with tiny collapsible umbrellas. 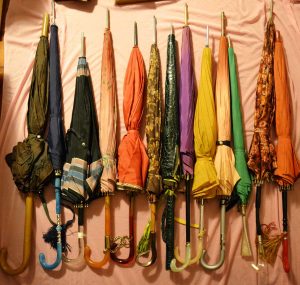 Nylon fabrics became the choice material for umbrella canopies in the 1960s, making for more rain-resistant and fast-drying umbrellas that could have all sorts of colours and patterns.

The late 20th century marked a number of small but notable changes in umbrella design, such as the use of aluminium and fibreglass in umbrella frames as well as Teflon coating.

Today, umbrellas and parasols enjoy a healthy global industry and technological advances that improve on their form and function, with people of all genders and classes using them, come rain or shine.