5 Unusual Ways to use an Umbrella

We take umbrellas for granted as handy accessories that protect us from the rain (especially in the UK), but we rarely think about them when we aren’t hurriedly searching through a bag to find one, or kicking ourselves for forgetting one.

However, the humble umbrella has a very long and noble history. The word ‘umbrella’ comes from the Latin root ‘umbra’, which means shade or shadow, and there is evidence that they were in use more than 4,000 years ago in civilisations as far apart as China, Greece, Egypt and Assyria. The Chinese were the first people to wax or lacquer paper umbrellas in order to use them in the rain, and they started to become popular in the western world during the 16th and 17th century, especially as protection from the damp climates of northern Europe with which we are still so familiar.

Umbrellas are fascinating objects that we tend to use and lose with careless abandon – more than 10,000 are mislaid each year on the London Underground alone.

At Umbrella Workshop, we think it’s high time we start thinking differently about umbrellas and how they can be a bigger part of our lives, rather than just an afterthought that we only think about when it starts to rain. Here then, are our 5 unusual ways to use an umbrella.

The original use for an umbrella was as a sunshade, rather than as protection from wet weather. Ancient Egyptians constructed shades from feathers, palm fronds and stretched papyrus, which were attached to chariots or held over the heads of royalty by servants.

Noblewomen in ancient Greece had female slaves carry parasols to protect them from the hot Mediterranean sun, but also as fashion accessories too. 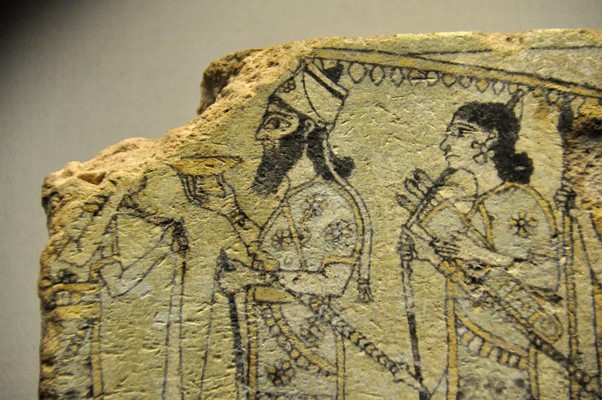 Using your umbrella as protection from the sun is an excellent idea, especially if you’re in an area that doesn’t offer shade from trees or buildings, such as at the beach or in open countryside. As well as stopping you from getting too hot, staying in the shade helps to prevent you getting sunburn, which isn’t only extremely uncomfortable but can lead to very serious conditions such as skin cancer.

Whilst a colourful umbrella might feel like a more summery choice, a black one is actually best as it absorbs the heat and keeps you cool beneath it.

2. Using an Umbrella as a Decoration

As well as having many practical uses, umbrellas are also aesthetically pleasing and therefore ideal for decorating a space. They are especially useful for decorating big events, such as parties and wedding venues, due to their eye-catching appearance. A large number of umbrellas hung from the ceiling have a dramatic effect, especially if you use a series of vibrant colours or designs. 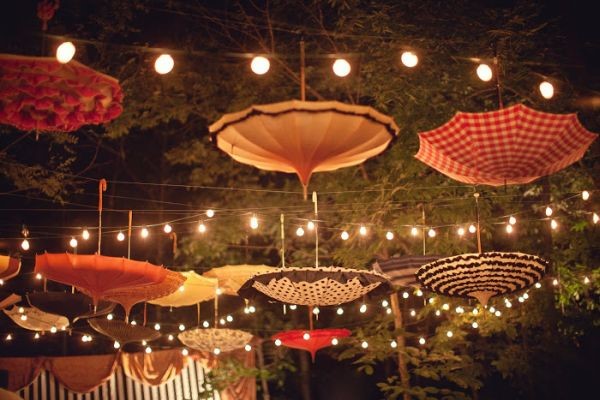 Umbrellas are also particularly useful for decorating outside events, because, by their very nature, they are sturdily built for outdoor use, and won’t be ruined by wet weather. Hung from trees or suspended on wires above a street or courtyard, they look fantastic, are super practical and can be used again and again.

3. Using an Umbrella as Part of a DIY Photography Studio

If you have ever been in a photography studio, you will probably have seen an umbrella in use as part of the photographer’s equipment. Umbrellas help photographer’s to create professionally lit images by diffusing light and giving it a softer effect. Instead of allowing light to focus directly on a subject, an umbrella bounces the light off in different directions. This results in a clearer image with softer shadows, or no shadow at all. 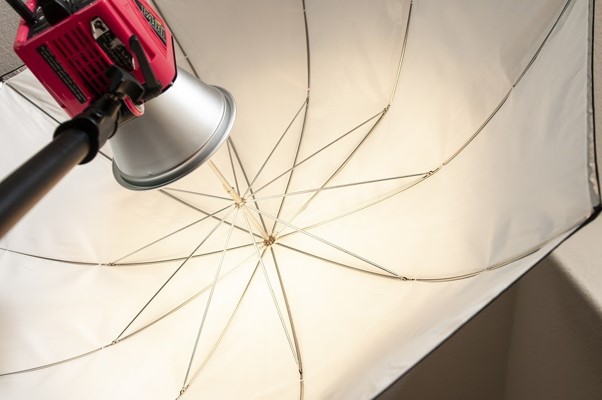 A white umbrella is the best choice for achieving a softer glow when taking photos indoors. The light source should be directed through the umbrella, which disperses the light and gets rid of dark, harsh shadows on or created by the subject. A black/silver umbrella (black on the outside/silver on the inside) brightens a subject and is usually used outdoors.

You can use any white umbrella for photography, but a black/silver one will have to be purchased from a specialist photography shop.

4. Turning an Umbrella into a Kite

Few things appear more useless than a broken umbrella. It’s estimated that more than 1 billion umbrellas are thrown away each year, which is a terrible waste of the planet’s resources.

But what can be done with a broken umbrella beyond flinging it in the bin? 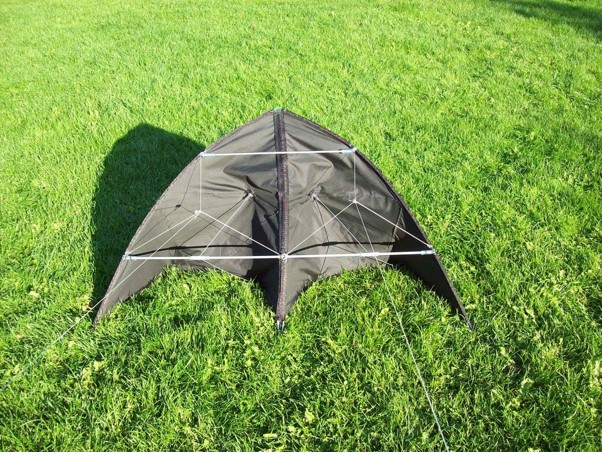 Well, you just need to use a bit of creative thinking to find ideas for using your umbrella beyond its original purpose. One such ingenious idea is to turn it into an impressive and incredibly aerodynamic Delta kite.

Using materials that can easily be gathered from around or home or cheaply purchased, including a bent bicycle wheel, string, elastic bands, aluminium pipes and, of course, your broken umbrella, you can follow these simple instructions to turn it into an amazing flying machine. With a bit of DIY, you’ll be soaring your recycled umbrella in the wind like a modern day Mary Poppins (although let’s hope you keep your feet firmly on the ground).

If your enthusiasm is a little more earthbound, your old umbrellas can also be used to spruce up your garden. Place an upturned, open umbrella on the ground and fill with soil, ideally a type that drains well and isn’t prone to puddling or pooling. In the soil, plant varieties of annual flowers that don’t require lots of root depth, such as sedum, petunias, geraniums, marigolds or begonias, then wait for them to bloom. 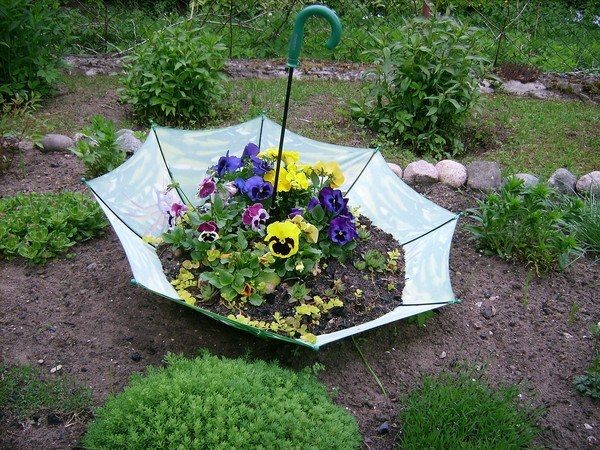 Umbrella garden planters are perfect for people with small outdoor spaces or those living somewhere temporarily, as they’re very easy to set up and take away, and don’t require garden beds. Using brightly coloured umbrellas that compliment the hues of your flowers can create a beautiful and vibrant garden quickly and cheaply. 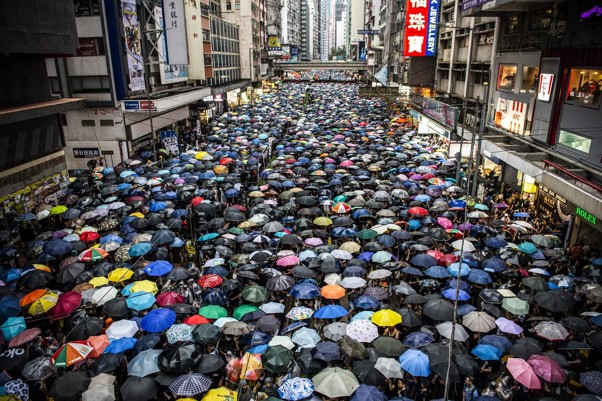 Of course this isn’t a definitive list and umbrellas have seen many other uses throughout history. One such use that in modern times that has really seen the umbrella become a symbol of resistance is the usage of umbrellas in the Hong Kong pro democracy protests. Seen as a symbol of protection and shelter, the thousands of umbrellas we’ve seen on our screens, as Hong Kong has endured months of protest, have seen the umbrella become the defining symbol of the movement and a powerful symbol of resistance to anti-democratic rule.

Umbrellas aren’t just symbolic forms of resistance either, as the French Presidential Protection Unit will very well know. These highly trained personnel all carry a ParaPactum umbrella which is a custom made protection device that can withstand thrown heavy objects, knife attacks and also be used for crowd control. Oh and it’s also useful for keeping you dry in the rain as well.

On a more practical note and closer to home, the umbrella can present a multitude of uses. Thinking outside of the box can breathe new life into an umbrella, whether it’s been bashed to bits by the wind, or you have lost and found so many of them that you have lots of spares on your hands. If you start thinking about your umbrella as something other than a device to keep you dry, you’ll soon find ways to use it all the time instead of just saving it for a rainy day.